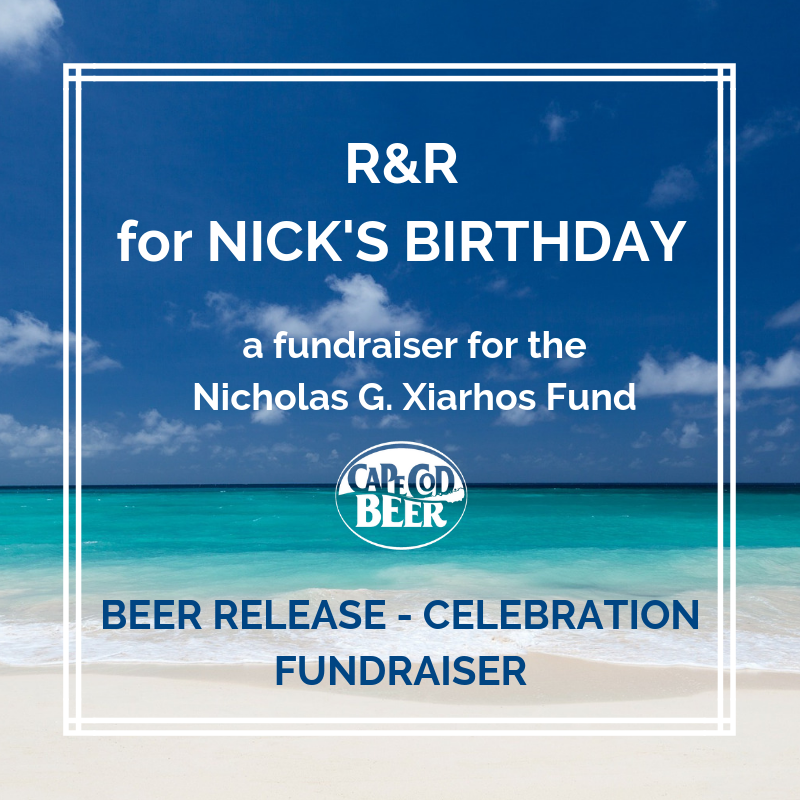 It’s our 2019 Black Ale Project Event celebrating Nick Xiarhos’ birthday! Live music with High Attitude, great food from the Yarmouth House, cash bar, and Cards for Guards!
Cost of admission is a $20 donation to the Nicholas G. Xiarhos Memorial Foundation Fund.
We will be releasing a special Black Ale that night in honor of the Black Ale Project…Our beer this year is R&R, a tropical stout. As part of the Black Ale Project, a portion of the proceeds from our R&R Tropical Stout will be donated to the Nicholas G. Xiarhos Memorial Foundation Fund.

Get your tickets HERE NOW

Please bring a $25 Gift Card so we can give to the US Coast Guard and other Military Families affected by the partial Government shutdown. Got Blood to Give? Cape Cod Healthcare will be here to talk about the 9th Annual US Marine Corporal Nicholas G. Xiarhos Blood Drive.

Nick’s Story
Nicholas G. Xiarhos was the first child of Yarmouth Police Department Deputy Chief of Police Steven G. Xiarhos & Lisa Xiarhos and the beloved big brother of three siblings. He graduated from D-Y High School in 2006. His family, friends, teachers & coaches remember his as a kind-hearted, selfless person who went out of his way to help others. In their senior year, his classmates presented him with the title “Does Most for Others.”

In just 3 years as a Marine, Nick earned the rank of corporal as well as 11 meritorious citations, ribbons & medals. He died on the battlefield on July 23, 2009 while going to rescue his fellow Marines in combat. Two weeks prior to his death, his last words to his mother were, “Don’t worry about me Mom…I’m living the dream.” His short life was not without purpose and he fulfilled his dream of serving his country.

The Xiarhos family created a fund in honor of Nick. The Nicholas G. Xiarhos Memorial Foundation Fund is designed to support local wounded warriors and their families and local military families in need of financial assistance. In addition, the fund also provides support to over a dozen ongoing community programs.

About The Black Ale Project
Dave Pappas is partnering with breweries across the country to support the Black Ale Project, a craft beer initiative to raise money and awareness on behalf of U.S. war veterans. As a former active duty Marine and non-combat veteran of the Persian Gulf War, supporting our war veterans is a cause that means a lot to Dave. The Black Ale Project itself isn’t a charity organization but an idea he came up with to help veterans in need. The concept is simple: “buy a beer, help a veteran.” There are two simple guidelines for participation: 1) brew a dark beer and 2) donate a portion of the proceeds to a veterans organization.